The Captain and Crew are pleased to announce that we will be sailing this year on board the good ship FolkEast 2018.  Follow this link to find out more about this smashing festival: https://folkeast.co.uk/

Look for us on the Soapbox Stage, in the woods, at dead of night on Sunday 19th August.  10 pm start!

Brixham Pirate Festival 2018 will soon be upon us!  After a weekend on the grog we will be playing on the Main Stage at 11 am on Monday 7th May.  We will be commencing our weekend of pirate fun and debauchery at The Old Coaching Inn, 61 Fore Street, on the evening of Friday 4th May.  Come and see us for real songs about real pirates! From 8.30 pm onwards.

Which might be a statement of the blindingly obvious, but you need to know that (most of) Captain Morgan’s Rum Do will be performing a short set for …

On Saturday 14th & Sunday 15th April 2018
on behalf of Southend on Sea Borough Council,
The Hoy at Anchor Folk Club is organising a Free Folk Festival
in aid of The Leigh Folk Festival Association at The Royal Pavilion on Southend Pier.

All participants are giving their time and performing without any personal reward.

As this is in aid of Leigh Folk Festival, which is a very good cause indeed, please try to drop in and see us!

We had a great day at the Smack! Unfortunately, The Captain’s Beard were stranded in snowy Sussex and couldn’t make it, but local band Grand Reunion stood in at the very last moment. Not that they made it without mishap, as they were without their guitarist, who was, at that very moment, waiting for the paramedics after having a bad fall while loading his kit. A depleted Tempus Experientia, in the shape of “Sailor Sam” (Kevin Corcoran), provided the links and the Hoy Shanty Crew sang their hearts out for us.

Nigel Townend won the songwriting competition. The Cap’n is a hard-hearted blackguard and insisted that entrants had to be there in person and perform their entry themselves – and Nigel did exactly that.

Rash. Impetuous. Foolhardy. Bold. Whetever you call it the Winter Pirate Gathering at Leigh on Sea is going ahead tomorrow after all. We have a band, The Captain’s Beard, braving the great outdoors to come up from Brighton, we have our own crew, Captain Morgan’s Rum Do, battling their way from Ipswich and Felixstowe and Tempus Experientia fighting the trains to come from the other side of London. The Hoy Shanty Crew are hardy folks and they plan to be there as billed. All we need now is an audience to make it all worthwhile…. come and spend the day in a pub – what else will you do?

Join Captain Morgan’s Rum Do for the Winter Pirate Gathering at Leigh on Sea – you know you want to be there!

You’re longing to hear The Captain’s Beard, aren’t you?

And you wouldn’t want to be anywhere else next Saturday, would you? 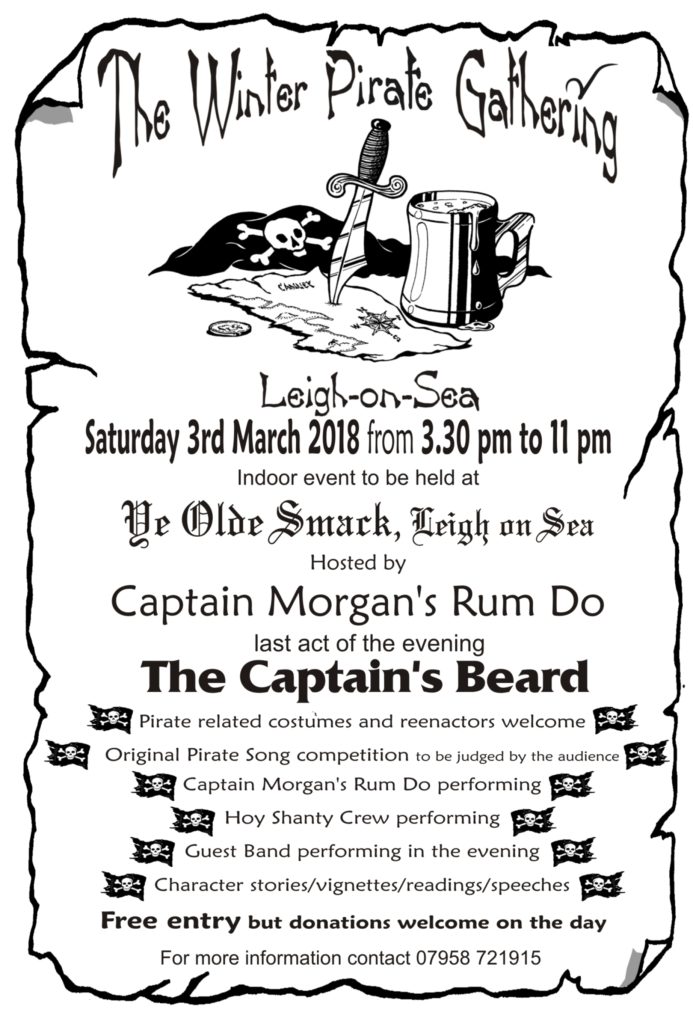 Come to the Olde Smack in Leigh on Sea on 3rd March for warmth, rum and piracy with Captain Morgan’s Rum Do and friends 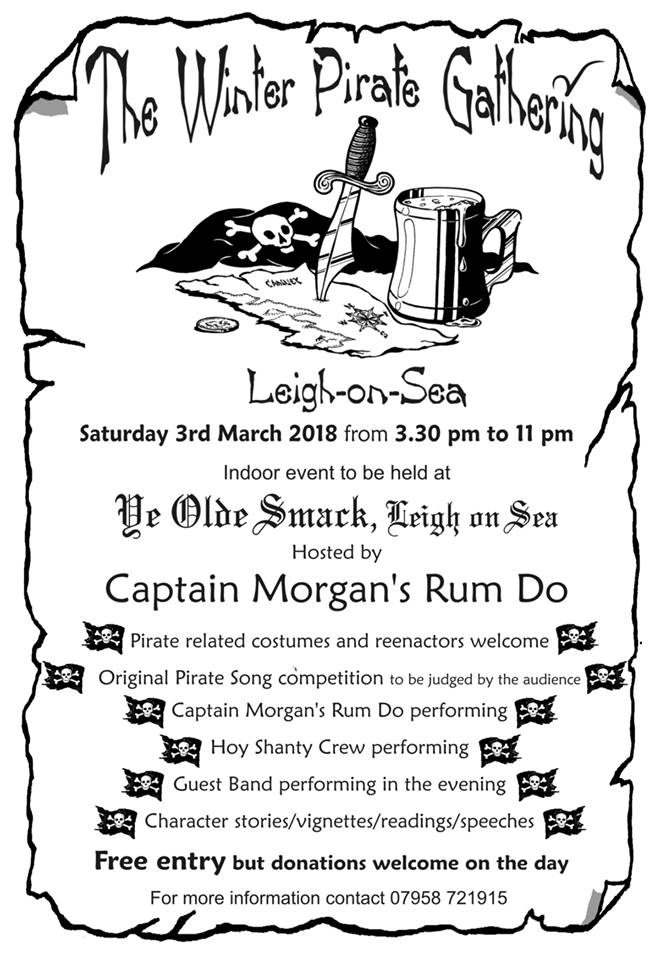 Write and perform your own pirate song (there will be prizes) … go on, you know you want to!

We are still negotiating terms with our guest band – these pirates drive a hard bargain!

Mother Cutbeard writes (because she can)

Those of you who have the eyesight of the wandering albatross – or a good spyglass – may have noticed some changes of lineup in our crew.

Aye, there have indeed been comings and goings aboard our vessel in the past sailing season.  Our first and most deeply mourned loss, Rommel the ship’s cat, a king among mousers and the terror of rat-kind, fought his last skirmish in late June at the grand age of 18 years or possibly 20, which be a good innings for a pirate of any species.  We buried him as he would have wished, over the side, and his spirit swims free among the fish of the sea – which will be a pleasant change from the rats and mice aboard our vessel.

I ought also to record the untimely, but not entirely unexpected, end of my long-lost son Black John.  Despite his unfortunate start in life, ripped as he was from my arms when but two hours old, it must be said of him that throughout his short life he never lost any opportunity to make a bad situation even worse.  Moreover, he never passed up any opportunity to indulge his baser instincts, and it was this that brought about his downfall.

We dropped anchor at Port Royal, which as ye be aware, is a thorough cesspit of abomination when it comes to the appetites of the flesh. Now John had already picked up a touch of the Spanish Pox when we called at Tortuga, but he’d applied the poultices, and we paid a wench skilled in simples, going by the name of Calico Cat, to cup him and lance his pustules.

So, as we touched Port Royal, John were more himself, but sadly, this meant that he was all the more inclined to indulge his aforesaid filthy lusts in this dunghill of debauchery. Into the sinks, the stews, the bawdy-places, the molly-houses, the taverns and the gaming-dens he plunged despite the warnings of his friends.  By the time he sought to return to the ship he was again infected with the Spanish Pox.  What a ghastly sight he was, black from corruption of his flesh and pustules such as in my life I never saw, the size of golden guineas and joining up with one another.  For the good of the rest of the crew, the Captain decided that we would not take him back on board, as we could not now nurse him and the Spanish Pox be such a virulent plague.  So there we left him to his fate, and may his fall be a warning to all young pirates who crave to so indulge.

We welcome to our crew two sprightly young females, one a cat, one a woman.  Hobnob the Slayer (cat) has joined us as ship’s mouser, and Calico Cat (woman) the same who lanced Black John’s pustules, has come on board to replace him in his duties. Not only can this wench lance boils and pack cutlass-wounds, she can handle a pistol as well as any man alive, and is nimble in the rigging to boot. Thus our crew be again complete.

Eventful month, during which the ever-beloved Mother Cutbeard, ship’s maid-of-all work, has required the services of the best barber-surgeon that money could buy. Clearly, he weren’t much good – even after being sobered up – so she has for the time being lost the use of her strong right arm. The crew think she brought it upon herself by her policy of not carrying her cutlass on a Sunday, the day of the week when this lamentable tragedy occurred. Good news is, she is still as lethal with her left as her right, and will soon be back on board! Details of 2017 sailings to follow!